Keith Haring is everywhere these days. You’re probably heard of the Keith Haring: Political Line exhibit at the deYoung Museum in San Francisco that’s currently open until February. You might have seen him on t-shirts, tote bags or windbreakers through the UNIQLO x MoMA collaboration or in any other number of fashion brand collaborations. If you haven’t heard of one of these exhibits or partnerships, you probably have seen a Keith Haring painting before without knowing it. Bold, graphic lines of figures, creatures and symbols that are intertwined. Before his death from AIDS-related complications, Haring was a bit of darling in our cultural landscape: universally liked by radical queer activists and the Sesame Street crowd. Today I had a chance to visit Pace Print’s small but mighty exhibit of (mostly) black and white limited edition prints. 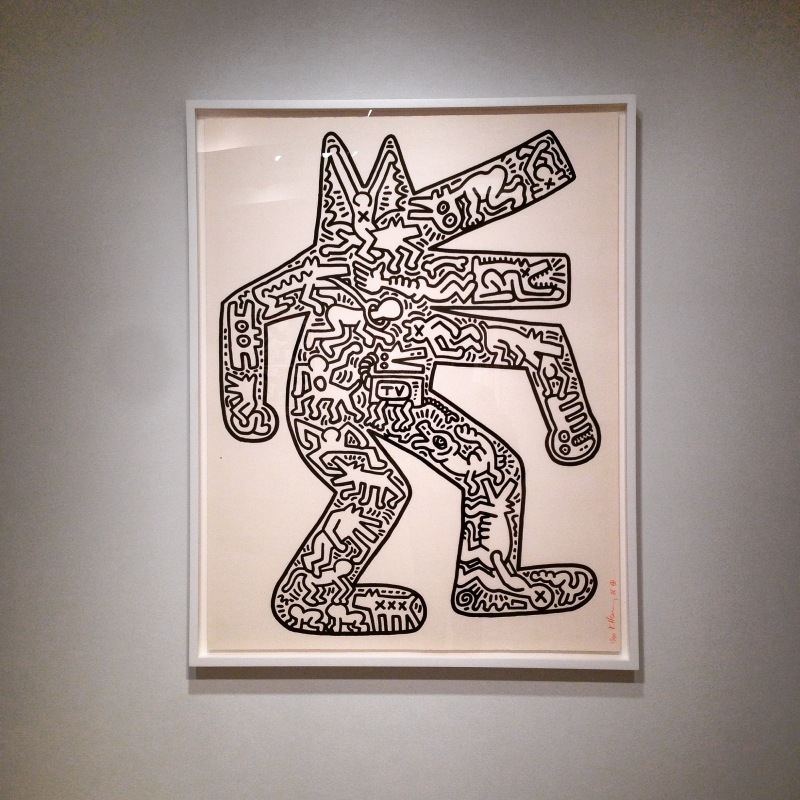 When you enter the Haring exhibit, you are greeted by two major prints. The first of them I will discuss later, but the second of these prints, shown above is a signature Haring figure: a human-animal hybrid, walking with an upright gait but possessing a snout. It takes a moment for the eyes to adjust to the intricacies of the interior, as if Haring directs our attention to internal and conflicting mechanisms that are control our decision making and outward appearances. But there’s often enough abstraction that the images presented remain open for interpretation and are, in the best sense, able to be timelessly reproduced and reinterpreted, given different social conditions. This piece sets the tone for the reminder of the exhibit.

I found myself wandering between the various pieces, as black and white thick lines are occasionally broken by pops of fire-engine red. Though the pieces remain connected by the same graphic style, each one possesses unique and intimate figurations that add variety. In the largest piece of the collection, for instance, a single figure with exposed shoulders and nipples has numerous long necks sprouting up, with an individual human figure tethered to it at the end. This piece seems weighed down, as if humans are striving for something but cannot quite escape whatever it is that holds them back. 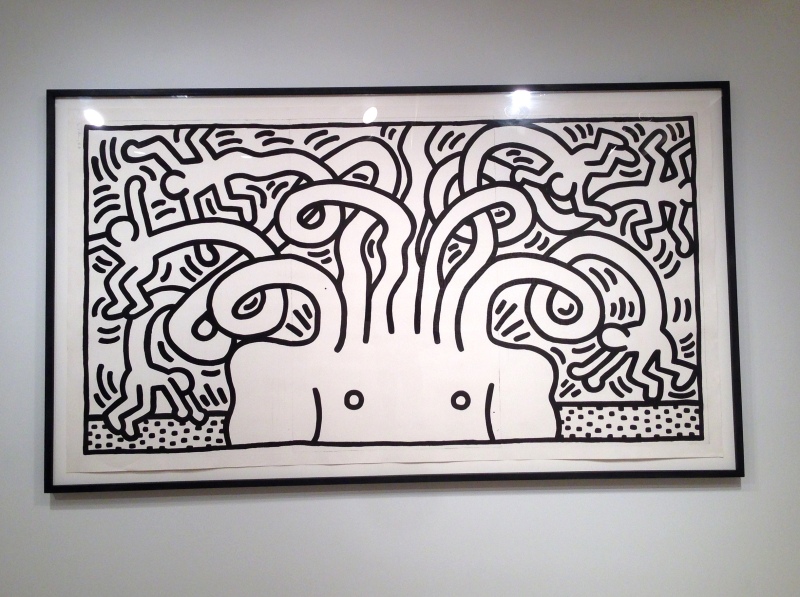 This stands in stark contrast to a small, tucked away room in the gallery where a looped video shows Keith Haring sitting in a corner that’s he drawn himself into. In another glass case, rare photographs show Haring in the process of his printmaking. In several of the photographs, he’s turned toward the camera, the eyes under those signature glasses flashing a knowing look. In all of the photographs, his intense concentration is apparent. As the gallery summary reads: “Haring describes his art-making process as, ‘Total control with no control at all. The artist becomes a vessel to let the world pour through him.'” 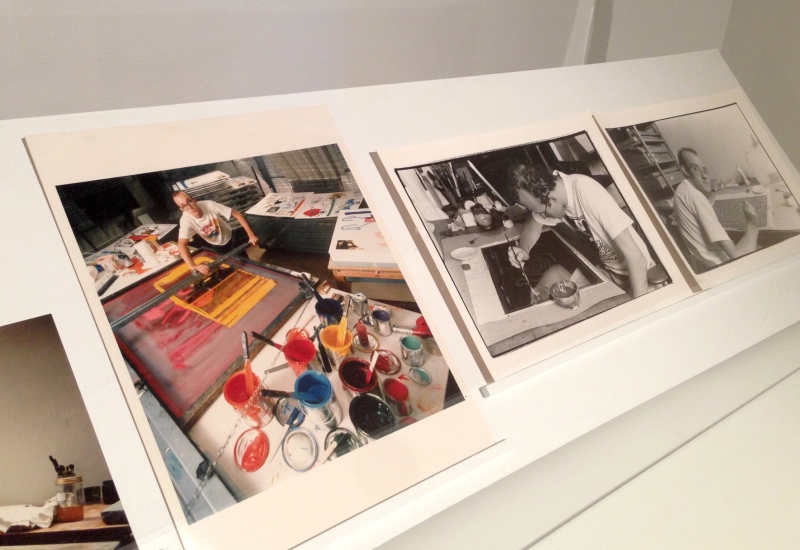 And how the world seems to pour through him in this small exhibit. Turning behind the photographs is a medium-sized vase, again with the signature human figurines that gesture wildly and reach out toward something, but that are nevertheless all connected in some way. Bodies fuse together or arms touch. In the dusty orange clay, you have a sense that here Haring has conquered up some Mesoamerican goddess to speak through him. As you get close enough to almost peer in, you expect some spirit to jump at you and pull you in. Maybe, you start to think, it’s Haring spirit that will appear for you. Maybe you’ll finally be able to ask what world he let pour through him. 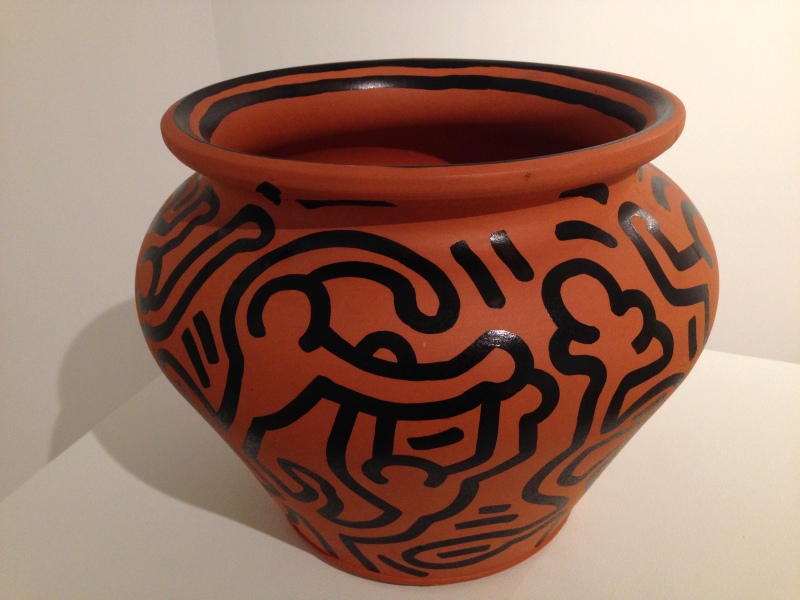 If you’ve been involved writing about HIV/AIDS and queer history like I have, you’ll also feel a sense of loss in this exhibit (or any exhibit by an artist who had AIDS). You’re so captivated by these frenetic, frenzied images that seem to suggest both light and dark of humanity, but the memory of those Haring images seems to fill in all of the negative space in those monochrome prints. Sometimes it seems too heavy, so you have to turn away, except when turning away is unavoidable, such as leaving the gallery and waiting the elevator.

Here that first exhibit that greeted you also says goodbye. This piece is the most spiritual of them all: some iconography vaguely Christian, but the effect much more ancient. Three individual panels pieced together that alternate red, black, red. It feels like a stone totem or high alter to what art can do as a political tool. The feels less like a fire engine here and more like blood. The blood of Haring, the blood of the AIDS dead, the blood of a future that feels altogether more interconnected and democratic. Everyone might not be able to see these exhibits, but Haring, in allowing his images to be continually reproduced, re-staged, and revived, anticipated his creative impulse would be kept alive well after he knew he was going to die.

I am committed to building out an educational platform related to HIV/AIDS and sexual stigma for queer folks under 35.